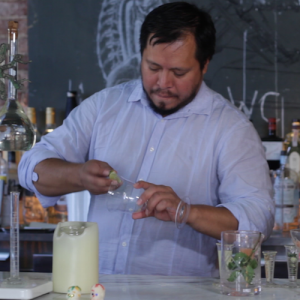 Miguel Aranda is a friend of the Santera Tequila brand and his interest in the culinary world started young - he grew up in Mexico City with a love for cooking instilled in him by his grandparents who took him on his first trips to the market. He learned the art of mixology from the best in the business, and began his professional career behind the bar in some of New York City’s most well-respected establishments including Town, Bar Masa, Daniel Wallsé and the critically acclaimed Apothéke. Botanic Lab is the culmination of Aranda's career as an established mixologist, and is his first solo endeavor. In Botanic Lab he has created a space that not only features well crafted cocktails and infusions but also as a venue to showcase the talents of musicians, DJs, artists and performers from around the world.