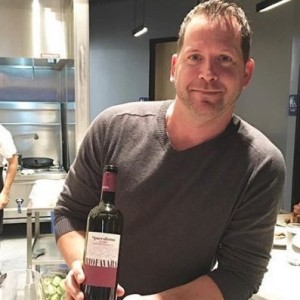 Ron Carey is the general manger, sommelier and beverage director at Simbal in Downtown Los Angeles's Little Tokyo. Known by friends as "Captain Ron Cuvée" (while working at Ray’s and Stark Bar, he used to pour sparkling wine for special guests), Ron has been working in the LA hospitality and beverage community since 2002. He first met chef and owner Shawn Pham in 2005 at David Myers’ Sona, where Ron worked for 7 years before joining Patina restaurant group (which includes Ray’s & Stark Bar). From day one, Ron’s vision for the wine program at Simbal was to, first and foremost, feature bottles that create a ballet when paired with Shawn’s food. His 115 bottle list leans heavily toward Old World regions that have a long history in biodynamic viticulture (based on the ideas from Austrian philosopher, Rudolph Steiner)—which produces bottles that are a natural pairing for Southeast Asian cuisine. The list is continually expanding and changing based on new finds that Ron is discovering from smaller producers; and at this juncture a large contingent of those bottles are certified biodynamic and organic. Ron’s mission to ensure harmony with Shawn’s fresh interpretation of Southeast Asian cuisine is also evident in his selection of local craft beers, signature cocktails, and house-made shrubs (like pineapple rosemary and strawberry blackpeppercorn). In addition to overseeing all aspects of the beverage program, including table side guidance to guests with impromptu tastings of his international and domestic wines, Ron’s strong leadership as general manager is felt throughout the restaurant. The industry veteran shifts seamlessly between the various roles he plays at Simbal, always maintaining the good humor that his Captain Ron Cuvée nickname would suggest.