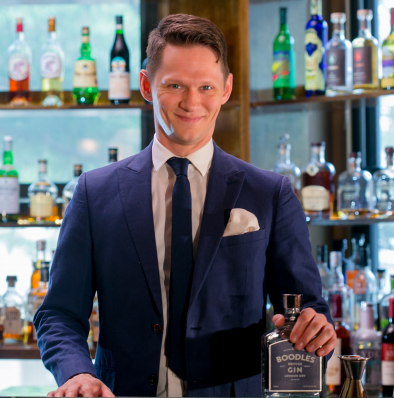 British-­born Tom Walker is a New York City bartender and brand advocate for Boodles Gin, the perfectly balanced London Dry Gin. As a supporter of Boodles, Tom engages with media on behalf of the brand and educates both press and consumers about Boodles Gin and the category as a whole. Prior to his current role, Tom graduated university in England with a journalism degree, but decided instead to pursue his passion for working in the service industry. After stints in Newcastle and Brisbane (Australia), Tom moved to Edinburgh, Scotland to work for the critically acclaimed and most distinguished bar, Bramble Bar & Lounge. It was here where he honed his bartending skills and developed a true love of gin. He took his craft to the historic and prestigious American Bar at London’s famous hotel, The Savoy. Tom is recognized as the winner of the 2014 Bacardi Legacy Global Cocktail Competition, where he represented the United Kingdom and took home the top prize with his cocktail, “Maid in Cuba.” Looking for his next big adventure, Tom packed his bags and moved across the pond to New York City where he can be found working with the amazing team at Fresh Kills.