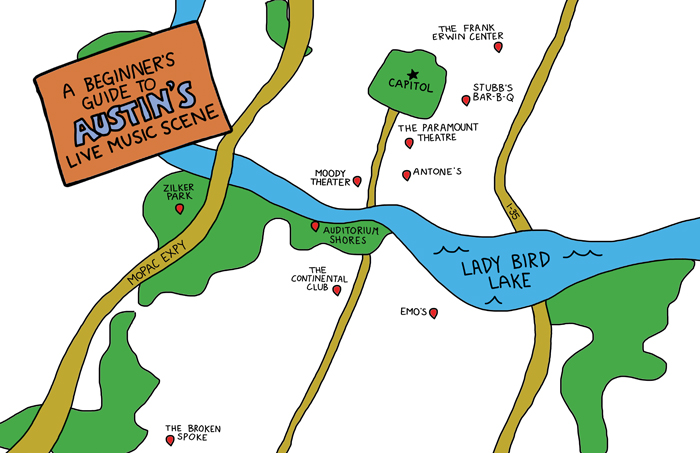 Antone’s began in 1975 as a blues joint, and the venue played host to prominent blues musicians such as B.B. King, Ray Charles and James Brown. Over 40 years later, Antone’s still prides itself on being a staple for Austin’s blues scene.

This lakefront venue is technically a park but that doesn’t stop it from hosting huge events like Fun Fun Fun Fest and performances during South by Southwest. When the park isn’t doubling as a music venue, you can usually find people sunbathing while dogs run around and play.

The Broken Spoke is a country dance hall that’s been an Austin tradition since 1964 when it saw the likes of Willie Nelson (before the long hair), Ernest Tubb and Bob Willis. If you’re looking for a boot scootin’ good time and some legendary chicken fried steak, the Broken Spoke is your destination.

Over the 60 years this establishment has been open, it’s been everything from a boujie supper club to Austin’s first burlesque club and is now one of Austin’s most popular live music venues. Slip on down to the historical landmark on South Congress, grab a drink and discover a new artist.

As its name would indicate, this music venue has always pushed the envelope and been into all things edgy. Emo’s started in the early ‘90s and has since helped mold the city’s live music scene.

The Erwin Center is a multi-purpose facility and is mostly known for being the home of the Longhorn basketball team, but it’s also the place to find some of the biggest shows in Austin. Built in the ‘70s, the Erwin Center stages everything from the Harlem Globetrotters to high school graduations to Kanye West.

Although the venue is relatively new, it’s home to the long-running ACL Live, which led to the annual Austin City Limits festival. Artists who perform at the fest visit the theater and perform a second show to be recorded for ACL Live.

This historic theater was built in 1915 and has played host to a myriad of events ranging from magician shows to Kris Kristofferson to Aziz Ansari to the premiere of the 1966 Batman film.

Although Stubb’s is a bit on the smaller side, it’s a live music institution in Austin. Its outdoor venue has seen performances from Stevie Ray Vaughan to Lil Wayne. And the barbecue is good to boot.

Zilker is possibly one of the most iconic places to listen to music in Austin. The park is over 350 acres and hosts the famous Austin City Limits music festival and Blues On The Green during the summer where lawn chairs, dancing barefoot and coolers of beer are encouraged (not officially).